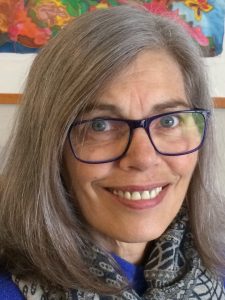 Anne Camozzi (she/her) creates art and writes in Mi'kma'ki Nova Scotia, Canada. An early passion for the arts led her to an Honours Bachelor of Fine Arts from York University (Toronto, Canada) in 1976. While studying painting, she was one of two writing apprentices selected to work with Canadian author, W.O. Mitchell. She worked as a stringer for Time magazine and as art critic for the York University newspaper, Excalibur. While at York Anne studied with Governor General award-winning poet Don Coles, who remained a lifelong mentor. After graduating, she joined the CBC (Canadian Broadcasting Corporation) as a television and radio reporter for a few years. Later, she moved to Nova Scotia and earned a Masters in Adult Education at Saint Francis Xavier University. While raising two children, Anne became an award-winning, international environmental education consultant, and later, one term as a university vice president (StFX).

A facilitator, writer and educator throughout her life, she has presented widely on many topics including environmental education, sustainable communities, nature and creativity, as well as art and pain management. As an environmental consultant, Anne wrote numerous manuals and papers and co-authored several books. As of June 2022, according to World Cat Library Identities, she has 34 works in 68 publications in two languages and 1888 library holdings. In addition to this more technical writing, she works on fiction, poetry, and journaling. In 2018, Anne’s story, The Great Caribou was longlisted for the CBC Short Story writing contest. She is currently querying a novel from that story and almost finished another novel, and begun work on a memoir.

In 2003, illness forced Anne to slow her fast-paced lifestyle and on the advice of her physiotherapist, she began using art as a distraction from pain. Picking up a paint brush for the first time in over 25 years, she soon regained the passion for art she had as a young woman, discovering a talent for paintings on silk, based on the French Serti method and began a full time studio practice. She is currently working in pen and ink, watercolour, digital art and photography, and contributes to the International Twitter Art Exhibition while doing public and private commissions.

She has done numerous private commissions, including art for offices of professionals with healing practices, and for individuals with cancer or in palliative care. Her art is in private collections in Canada, Europe, India, and the United States, and in public collections in Nova Scotia. She has exhibited in group shows at St.Francis Xavier University Art Gallery and Lyghtesome Gallery and in Ontario, as well as in a solo show at the J. Franklin Wright Gallery in Nova Scotia.

Integrating her lifelong interests, she has many writing and art projects, while enjoying family and grandchildren, and remains engaged in advocacy and social justice projects. An advocate for sustainability and climate action since the 1980s, she continues to advocate on issues such as disabilities, accessibility, elder care, poverty, equity, and truth and reconciliation.